You are here: Home / Carmelites in Action / Salvadoran Carmelites Maintain Strong Vocation Effort Throughout the Country

A vocation fair at the parish of St. Peter the Apostle in Metapan, Santa Ana on Sunday, October 7, 2018, allowed the Carmelites the opportunity to introduce themselves to many people in the northwestern area of the country. The province was represented by two Carmelites, Br. Roger Melara and Br. Cecilio Hernandez. Br. Cecilio was born in Metapan, a city in the district of Santa Ana.

The vocation fair allowed the people to come together for Eucharist as well as to circulate through the tables with materials from the various congregations who are present in the various dioceses of El Salvador. The local diocesan seminary was also present.

This only one of the vocation efforts made by the Carmelites in El Salvador. Others include a weekly radio program focusing on various themes in Carmelite spirituality or the Church; the visiting of parishes throughout the country along with a team from the Lay Carmelites and youth group to speak to the parish leadership about the Order as well as services the Order can provide to the parish; a monthly bulletin as well as copies of La Revista Carmelitana sent to every religious leader in the country. The community at Centro Xiberta also hosts young men who are interested in learning more about Carmelite religious life.

Half of the population of El Salvador identifies themselves as Catholic. The Carmelite Province of the Most Pure Heart of Mary officially established itself in the country in 2014. Today there are four Carmelite priests, 5 professed students, and 5 pre-novices. Students attend the Universidad de Central America. 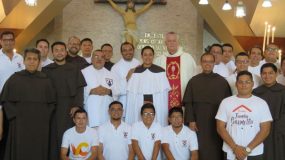